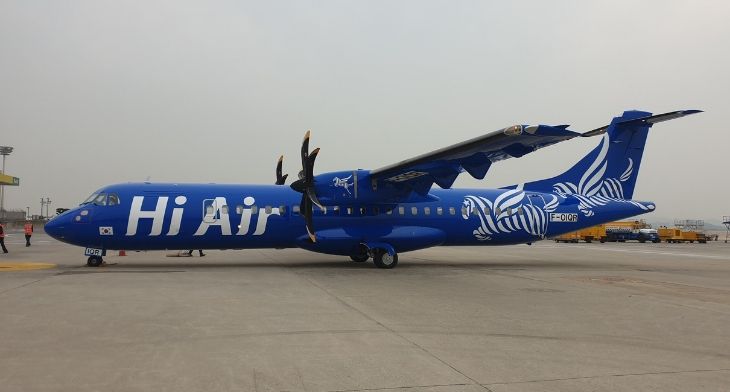 Hi Air has taken delivery of its first two ATR 72-500s which arrived at Seoul’s Gimpo Airport on 24 July. The airline is aiming to start a regular service with the aircraft later this year once it receives its AOC.

The airline will be based at Ulsan and plans to focus on domestic routes before launching a a short-haul service on international routes.

“We chose the ATR aircraft because it has lower fuel burn, can take off and land from short runways and is well supported in the region in terms of maintenance and training,” said Hi Air chairman and CEO Hyung Khan Yun.

Domestic air traffic in Korea is currently routed through Seoul and Jeju, but ATR sees there is opportunity to connect second and third-tier cities direct, providing greater convenience for passengers and economic development across the country.

“The domestic air routes in Korea are mostly connecting Seoul in the north, to cities in the south. There are almost no air services connecting the east and west of the country. It takes three-four hours to travel between cities in the east and west whereas ATR aircraft could fly between these destinations in under an hour,” says ATR head of sales Fabrice Vautier. “ATR aircraft could also help regional cities become air hubs,” he adds.

There are international flights to some second-tier cities in Korea. “But then air travellers need to connect to domestic flights to other parts of the country beyond just Seoul Gimpo and Jeju,” states Vautier. “If this regional connectivity can be achieved, these cities can become thriving hubs.”