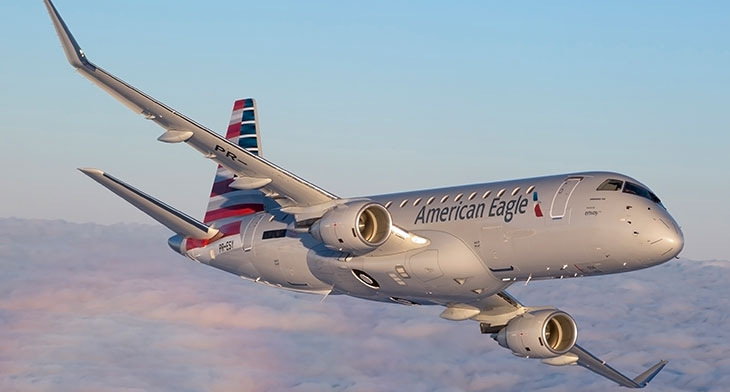 American Airlines has signed a firm order with Embraer for 15 E175 jets in a 76-seat configuration, to be operated by the carrier’s wholly owned subsidiary Envoy Air.

The contract is valued at US$705 million, based on current list prices, and will be included in the Brazilian manufacturer’s Q4 2018 order backlog. Deliveries will start taking place in 2020. Combined with the airline’s previous orders for the E175, this latest contract results in a total of 104 E175 jets for American Airlines since 2013. The most recent order took place in May this year for 15 aircraft.

According to Envoy the new regional jets are expected to begin arriving at the rate of three per month, starting early in 2020. “This is in addition to the 25 E175s currently on order that begin arriving later this month and continue through 2019. By mid-2020, Envoy’s E175 fleet will have nearly doubled to 84 jets from where it is today. In total, Envoy’s fleet numbers more than 170 aircraft, including over 100 44- and 50-seat Embraer regional jets. This new aircraft will position Envoy to continue growing and expanding its service for American,” it stated.

The 76-seat configuration will see 12 in First Class and 64 in the main cabin.

“This new order from American Airlines continues to show the value that airlines place on our best-selling E175 aircraft,” said Charlie Hillis, vice-president, sales and marketing, North America at Embraer Commercial Aviation. “We are fully committed to providing fleet solutions that have a positive bottom line impact, and our E175 leads the charge with over 80% market share in the North American market.”

Embraer has now sold more than 435 E175s to North American airlines since January 2013.