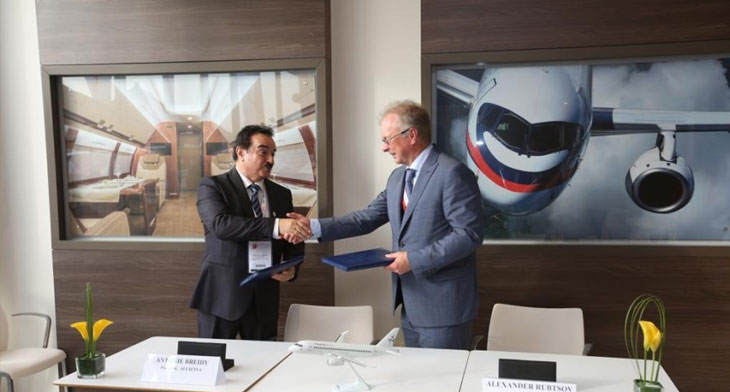 Dubai-based charter company Alexcina LLC has signed a Letter of Intent with Sukhoi Civil Aircraft Company (SCAC) for the potential purchase of up to 12 SSJ100 aircraft.

Signed at the Bahrain Air Show 2018, SCAC said the pair are expected to continue negotiations “On the delivery of up to 12 SSJ100 aircraft for further operation in the Middle East region and other countries.” The configuration and terms of the delivery will be defined through further negotiations, and the aircraft will either be delivered to the Alexcina Airways sub-company or to other Alexcina LLC Customers.

The SSJ100 aircraft is also being presented as part of the static display at the Bahrain Air Show, with the aircraft featuring the livery of the Russian regional airline, Yamal, with eight business seats and 85 economy seats.

SCAC said the aircraft on display is equipped with the convertible layout and can be operated with either the 100-seater economy class layout, or with business class seats depending on the customer’s needs.