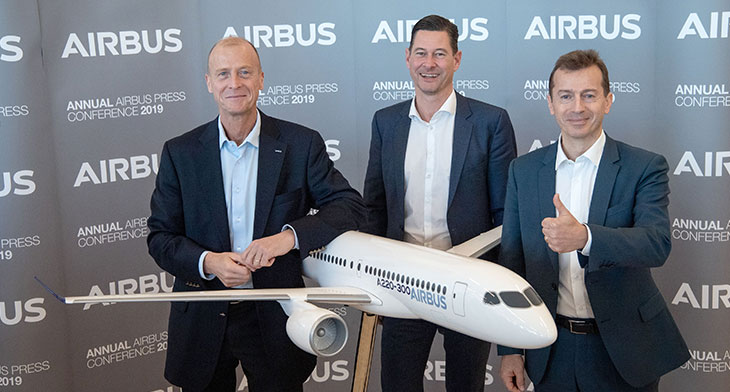 Airbus has reported record profitability for 2018 and is planning to ramp up aircraft production in 2019, with the exception of the A380 programme which is to be wound down due to lack of demand.

“Though 2018 had plenty of challenges for us, we delivered on our commitments with record profitability thanks to a strong operational performance, particularly in Q4,” said Airbus chief executive officer Tom Enders.

As of 1 July 2018 the A220 aircraft programme has been consolidated into Airbus. Airbus said the focus for the A220 programme remains on commercial momentum, production ramp-up and cost reduction. A320neo Family deliveries increased to 386 aircraft (from 181 in 2017) and represented over 60% of overall A320 Family deliveries during 2018. The first long-range A321LR was delivered in the fourth quarter.

While deliveries of the Airbus Cabin Flex version of the A321 are expected to increase in 2019, Airbus said the ramp-up will remain challenging. Further upgrades of the Pratt & Whitney GTF engine for the A320neo are also due to arrive in 2019.

Overall, Airbus said the A320 programme is on track to reach the monthly targeted production rate of 60 aircraft by mid-2019 with rate 63 targeted in 2021.

Enders continued: “With an order backlog of around 7,600 aircraft, we intend to ramp-up aircraft production even further. However, due to the lack of airline demand we have to wind down production of the A380. This is largely reflected in the 2018 numbers.”

Following a decision by Emirates to reduce its A380 orderbook Airbus said: “As a consequence of this decision and given the lack of order backlog with other airlines, deliveries of the A380 will cease in 2021.”

A350 deliveries increased compared to 2017 and included 14 of the larger A350-1000s, the programme reached rate 10 in the fourth quarter of 2018 and the backlog supports this rate. Airbus said it will continue to improve the A350 programme’s performance to reach breakeven in 2019 and improve margins.

Airbus reported revenues of €64 billion and adjusted EBIT of €4,808 million (from €2,383 million in 2017) reflecting the higher aircraft deliveries. The company said the improvement is driven by progress on the “learning curve and pricing for the A350” as well as the A320neo ramp-up and pricing premium. Currency hedging rates also contributed favourably.

Consolidated net income of €3,054 million (compared to €2,361 million in 2017) included a negative impact from the financial result, mainly driven by the evolution of the US dollar and revaluation of financial instruments.

For 2019 Airbus is targeting 880 to 890 commercial aircraft deliveries. The company also expects to deliver an increase in EBIT Adjusted of approximately +15% compared to 2018 and FCF before M&A and Customer Financing of approximately €4 billion.