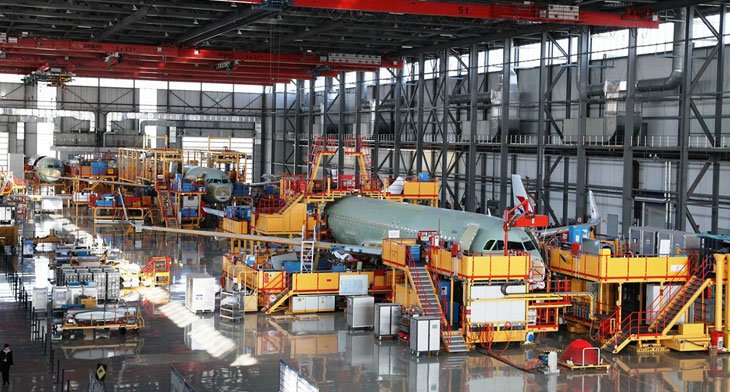 Airbus ramps up Tianjin A320 production

Airbus and its Chinese partners have signed a framework agreement to increase its A320 production rate at its final assembly line in Tianjin to six aircraft per month.

The ramp-up aims for five aircraft monthly by early 2019 and six per month by early 2020.

Since its inauguration in 2008 the final assembly line in Tianjin had assembled a total of 354 of the A320 Family aircraft by the end of December 2017.

Airbus also signed a Memorandum of Understanding with the National Development and Reform Commission of China (NDRC) on the further development of industrial co-operation in Tianjin. Both sides agree to further enhance their industrial partnership in Tianjin and strengthen the co-operation with regards to technical innovation, engineering capabilities and supply chain expansion.

The MoU agreement was signed by He Lifeng, chairman of the National Development and Reform Commission of China, and Fabrice Brégier, Airbus COO and president commercial aircraft in Beijing. The visiting French president Emmanuel Macron and Chinese president Xi Jinping were both in attendance.

“The industrial co-operation between Airbus and China and its continued success are a true role model of a winning partnership between China and Europe,” said Brégier. “Together with our Chinese partners we are proud to lift our co-operation to new heights.”