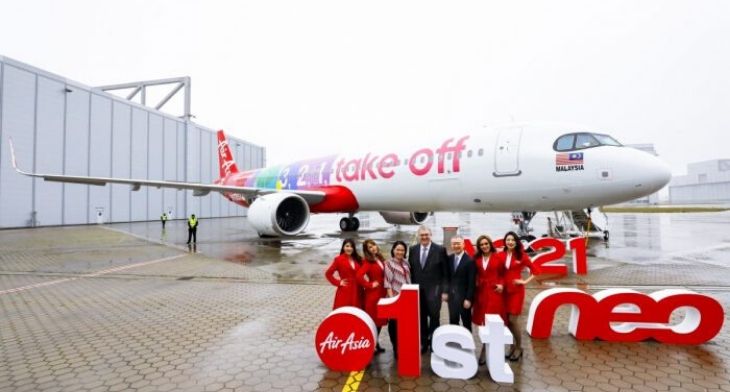 A delivery ceremony on Wednesday in Hamburg saw budget airline AirAsia take delivery of its first Airbus A321neo. The narrow-body long-haul jet will begin operating this week from AirAsia’s hub in Kuala Lumpur to cities across Asia. Destinations already confirmed include Kuching and Kota Kinabalu.

AirAsia Indonesia CEO Veranita Yosephine said: “We could not be more thrilled that it will be the new backbone of our operations across the AirAsia Group. With the 25% increase capacity and 10% reduction in cost per seat, the A321neo will enable us to maintain low fares so ‘Everyone Can Fly!’ This new generation aircraft delivers significant capacity and cost benefits which we can pass on to our guests in the form of great value fares and it also unlocks exciting network expansion opportunities allowing us to fly the aircraft for an additional one and a half hours longer.”

The airline revealed the order for the A321neo at the Paris airshow earlier this year. The airline announced it was switching its 253 A320neos to the larger A321neos. This will make AirAsia the largest customer in the world for the type.

The up-scaling of the order in June was welcome news for Airbus. Although the quantity of aircraft ordered stayed the same, all of them being converted from existing A320 orders make the biggest order for the larger variant of the narrowbody to date.