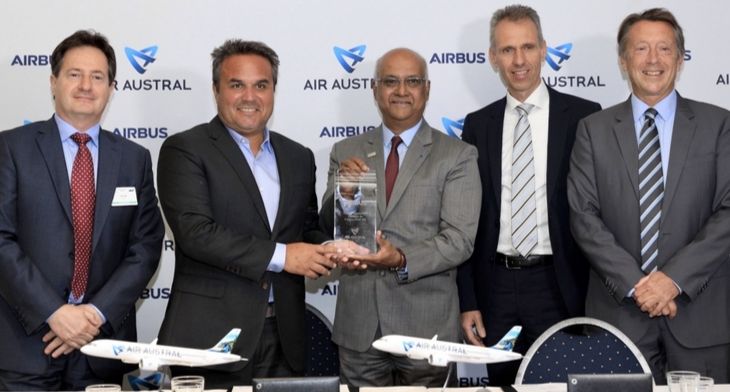 Air Austral, France’s Réunion Island-based airline has signed a firm order for three A220 aircraft, making the carrier the first A220 aircraft customer based in the Indian Ocean region.

The airline opted for the A220-300 as part of the renewal of its short- and medium-haul fleet, with the new aircraft set to join from the end of 2020.

Marie-Joseph Malé, chief executive officer of Air Austral said the aim is to harmonize part of the fleet and strengthen operations, adding: “The economic and operational performance of the A220 opens new possibilities for the development of our regional network from our main base – Réunion Island – in an efficient and rational way.

“The 132-seat capacity module, which is more flexible, will allow us to increase our frequencies while offering more comfort to our customers and crews.” Christopher Buckley, executive vice-president commercial – Airbus said the A220 is the “perfect” aircraft for Air Austral “to reinforce routes between Réunion Island and its neighbours in the Indian Ocean as well as connecting the island further afield.”

Airbus said the A220 would enable Air Asutral to reduce its costs and carbon footprint on international routes in the region. The new clean sheet single-aisle aircraft allows for more seats, offering extra revenue potential to airlines, Airbus added, especially to those located in remote areas and extra usable cargo volume capacity.