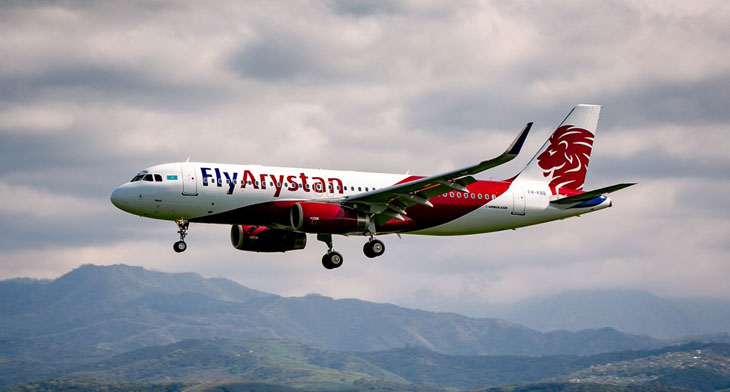 FlyArystan, the new low-cost carrier from Air Astana, has taken to the skies with its first flights from Almaty International Airport in Kazakhstan, with the aim of reaching “a new generation of travellers.”

The airline is starting with six domestic routes to Taraz, Shymkent, Pavlodar, Uralsk, Nur-Sultan (Astana) and Karaganda, and Air Astana has supplied an initial two Airbus A320 aircraft from its fleet under its Air Operator’s Certificate, painted in the red and white FlyArystan livery.

A further two A320s will follow in the last quarter of the year, by which time FlyArystan aims to be operating at least 12 routes and will be looking at obtaining an AOC in its own right.

“With this exciting new airline we are courting a new generation of travellers. People who typically get around our large country using the train or bus, or those who don’t travel at all,” explained Tim Jordan, head of FlyArystan. “We are pitching FlyArystan at the visiting friends and relatives market, primarily. In turn this will stimulate the leisure market as a second strand, together with an element of business travel.

“A number of destinations handed over to us by Air Astana will suit a different, more price-conscious demographic. Accordingly, we aim to introduce some purchase options giving flexibility for business flyers, including offering refunds or the ability to change tickets, albeit at higher tariffs,” Jordan continued.

The aircraft have been newly retrofitted with 180 brand new blue leather Recaro slim-line seats with red headrests – the same colours as the cabin crew uniforms which have been designed by a local fashion house, working closely with Air Astana’s in-flight team. The seat pitch is 29 inches, but the airline suggests the curve of the seat and high positioning of the seatback pockets provides the feeling of extra space.

Jordan welcomed Kazakhstan’s decision to implement legislative changes enabling airlines to start charging passengers for baggage but added that “it is important that baggage costs are not out of kilter with FlyArystan’s low fares, as it sets out to capture new flyers.” Passengers can travel with 5kg of hand or cabin baggage without a baggage charge, but 10kg of luggage will incur a cost dependent on how long the route is.

The airline has built up a 160-strong workforce in the six months from the announcement, who have been established in Almaty, Air Astana’s HQ. This includes 25 pilots and 45 flight attendants, with many seconded from Air Astana. The rest are new recruits who, as well as undertaking call centre reservations work, are being trained to assist in ambassador roles at check-in as part of the airline’s ground services team across the seven initial cities it is serving.

The airline’s base airport, Almaty International Airport, has embraced the budget airline model, FlyArystan said: “They see we have a lot of these low fare seats on offer and are beginning to understand the efficiency we are pledging to bring – for our passengers and the airport.”

The airline’s logo is of a lion, a popular animal in Kazakhstan and central Asia, which Jordan says reflects the airline’s “brave and courageous” low-fare approach. He explained: “What we are doing with this new airline is delivering something new and different for the people of Kazakhstan.”