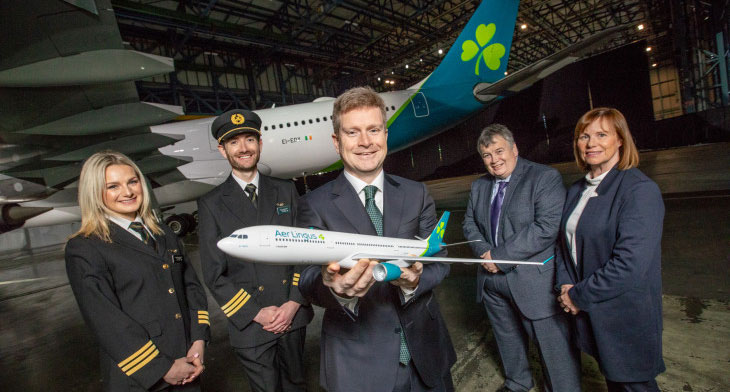 Aer Lingus has unveiled its updated logo and new aircraft livery as part of its brand refresh as it aims to become the leading value carrier across the North Atlantic.

The new logo retains the airline’s shamrock icon but has restyled it to add a tilt and heart-shaped leaves symbolising “dynamism and speed” and “warmth and hospitality” of the brand. The logo font has also changed to a teal colour.

The refresh is part of the airline’s growth plan which will see it increase its North Atlantic fleet from 17 to 30 aircraft by 2023. Overall, Aer Lingus plans to grow its A330 fleet to 16 aircraft (from 13 in 2017) and invest in 14 new A321LRs to provide capacity for growth across the Atlantic and within Europe.

The body of the new aircraft will be white with a teal-coloured tail and engines. The airline says the teal undercarriage means Aer Lingus will be “instantly recognisable” from the ground. The aircraft livery features four shamrocks, the first in the new logo, the second on the tailfin, a third welcoming guests at the door and they also feature on the wingtips.

“We have ambitious plans for our future and the years ahead, yet we are aware of challenges facing the modern industry and thus investment in our new brand identity and livery; our new uniforms which will be unveiled later this year; and our fleet expansion are considered investments in the future of Aer Lingus to enable us realise our ambition to be the leading value carrier across the North Atlantic,” he continued.

The brand refresh is being rolled out across all brand platforms, with a new website design and new app design. The new brand will also be visible across all guest touchpoints, from check-in to boarding gate and to the aircraft.

Rutter highlighted innovations introduced by the airline including the roll-out of Wi-Fi on Aer Lingus’ A330s, automated check-in and bag drop at Dublin Airport, improvements to business class with fully lie-flat beds and economy catering upgrades.

“The new look Aer Lingus livery consolidates our position as a modern, contemporary Irish airline on the international stage, but also allows guests who have always loved our brand to maintain a positive affiliation,” Rutter continued.