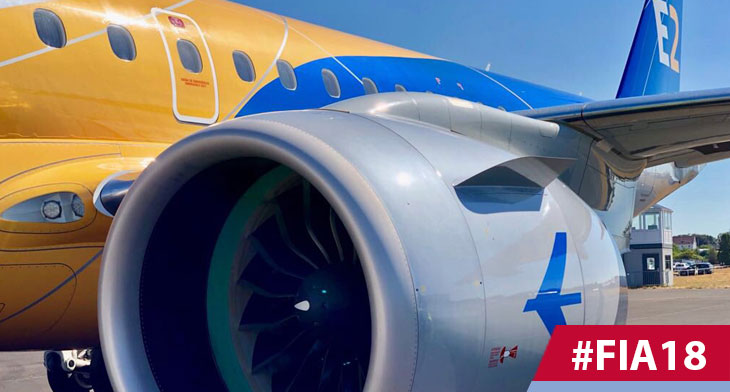 A total of 25 E175-E1 aircraft have been ordered from Embraer by United Airlines in a 70-seat configuration, it was confirmed at the Farnborough Airshow.

The firm order is valued at US$1.1 billion, based on current list prices, and will be included in Embraer’s 2018 third-quarter backlog. Deliveries will begin in the second quarter of next year.

“We are thrilled that United is adding another 25 Embraer aircraft to the large existing fleet of almost 400 E-Jets and ERJs currently flying in the United Express network,” said Charlie Hillis, vice-president, sales and marketing, North America at Embraer Commercial Aviation.

“The new E-175 aircraft will provide our customers with a superior product that offers the latest in onboard amenities and comfort,” said Gerry Laderman, United’s senior vice-president of finance. “These aircraft will be a terrific addition to our fleet, and we are excited to begin taking delivery of the aircraft early next year.”

Including this latest deal, Embraer has sold more than 420 E175s to North American airlines since January 2013, earning more than 80% of all orders in the 70-76-seat jet segment, it said.

Embraer also forecast demand for 10,550 new aircraft (up to 150 seats) worldwide, a market valued at $600 billion over the next 20 years. The in-service fleet is set to increase to 16,000 aircraft, up from 9,000 currently in operation. Market growth will drive 65% of the demand, while the remaining 35% will replace ageing aircraft.

“Past performance is no guarantee of future results. Even though every facet of the industry has excelled over the past years, we are now warming up for the next period of higher costs, with pressures on yields likely to continue unabated. Profits are eroding and gains wiped out with rising costs”, said John Slattery, president and CEO.

After a press flight on the E190-E2 on Sunday, Embraer also highlighted that since entering into service with Norway’s Wideroe, the aircraft has so far clocked up more than 800 flight hours at an average of seven hours per day. It has also achieved 100% schedule reliability in eight of its 11 weeks of operation so far.